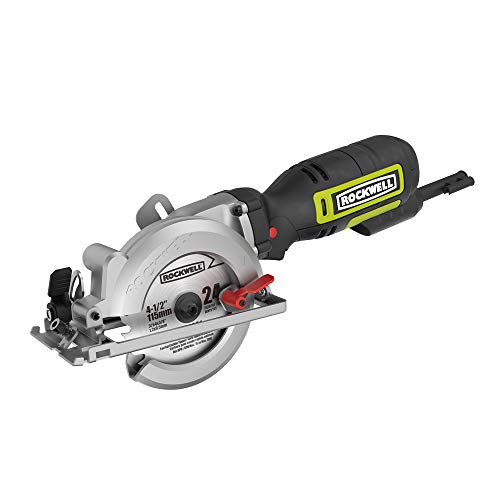 The Rockwell RK 3441K is obviously much different than the DeWalt above it in our guide, and obviously it’s different than many power circular saws. This Rockwell is obviously a trim saw, and we think it’s one of the best ones if not the best one you can buy. When it comes to a trim saw, you’re looking for a small sized tool you can use to make quick and short cuts to things like (surprise!) trim pieces and edges. The Rockwell has a smaller and thinner blade as compared to the standard 7-and-a-quarter units, which is good obviously as it helps to keep the weight down. Luckily both the quality of the blade is hight and the engine in the Rockwell is pretty powerful, so you don’t lose a lot of performance. The Rockwell literature claims that their miniature unit still has full-size circular saw performance and cutting speeds. While we wouldn’t go THAT far with the performance claims, it’s still a great tool and our favorite small saw. If you need to make quick and easy cuts, you could do worse than picking this tool.

Do you need a smaller saw? If so, this Rockwell RK 3441K will probably be good for you. A lot of people buy this because they don’t really have a need to cut 1000s of 2x4s every week, but they want a saw around the house or in the garage for occasional use. This is sort of like owning a small car for occasional use instead of, say, a Suburban or a Range Rover. It makes to have something small for occasional use. Knowing that this ”small saw” isn’t low-quality at all helps. Guys who build staircases, fireplaces, railings, furniture, and trim swear by these smaller tools, and if you’re grabbing this to add to your arsenal on the jobsite you could do a lot worse. This is a big saw in a small package, and it’s warranty and reasonable price add to the total package.

How to Create a Wooden Christmas Tree with...

© 2020 Surf’n’Buy. All rights reserved. As an Amazon Associate we earn from qualifying purchases.